The iconic Hard Rock Hotel and Casino is undergoing a $1.8 billion expansion, with a gleaming 36-story, guitar-shaped hotel as its stunning centerpiece. Such a unique and challenging project requires a wide range of specialist geotechnical skills and expertise – making it ideal for the Keller team. 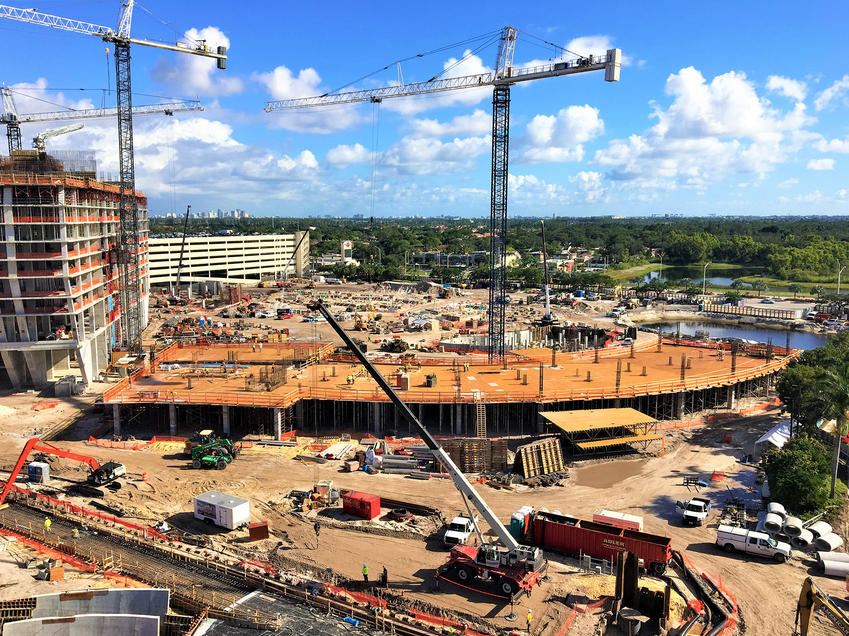 The Seminole Tribe has lofty plans for its flagship hotel and casino in Hollywood, Florida. Alongside a glass-fronted, guitar-shaped hotel on the edge of an expansive lake, the complex will also feature what’s claimed to be the largest pool area in the Caribbean, plus an expanded casino and new show venue. Once it’s finished, the entire complex will create around 3,000 jobs.

With experience of working on previous phases of the casino and on other Hard Rock properties – including those in Coconut Creek, Tampa and Louisiana – Keller was appointed by general contractor Suffolk for this high-profile development.

In fact, three of our business units were involved throughout 2017, providing world-class expertise and delivering a complete solution largely under one contract, saving the client money and eliminating the need for multiple contractors.

The project scope involved designing and building the foundation support system for all of the proposed new buildings, but the team faced significant challenges.

“The area was very swampy and peaty, with deep lakes and poor soils,” explains Keller Vice President Andres Baquerizo. “A lot of the work also had to be carried out in low-headroom areas.”

Keller designed and installed all of the piling work on the main hotel tower, as well as for a smaller, poolside tower, the Hard Rock Live stadium and for the low-headroom areas of the valet tunnel connecting the garage to the casino.

The latter was located beneath an existing garage in a confined area with just a 16ft vertical clearance in places. Keller also constructed 15ft-deep gravity walls (between five and 10ft thick), using wet soil mixing. Excavation support in open headroom switched to sheet piles. But not only did the team have to contend with low headroom within the garage, they also had to work next to and beneath an $8 million, 200ft-long television screen, curving around the car park.

“We used specialty batching and soil mixing equipment to create in situ soilcrete into which we installed driven H-piles. Once we’d cleared the garage area and television, we were able to install a sheet pile earth-retention system using traditional pile driving.”

Sheet pile lengths ranged from 17 to 40ft, with micropiles used under the low-rise structures as deep foundations. Once the tunnel excavation began, the team installed internal bracing along the top of the sheet pile system.

Other Keller techniques included using vibro compaction, vibro replacement/stone columns and compaction grouting to increase the bearing values on the shallow foundations for the low-rise structures, and auger cast piles for the deep foundations of the main tower.

Throughout, the Keller team had to be mindful of not interfering with the day-to-day operations of the existing casino. Any unplanned disruption or delay would cost the casino thousands of dollars a minute, so the team had to plan carefully to avoid any financial penalties.

While Keller was focused below ground, another Keller company, Suncoast Post-Tension was looking up, bringing its expertise to the main hotel tower.

Suncoast supplied 700,000ft of encapsulated unbonded post-tensioning materials and 5,000 Suncoast SRS® (Stud Reinforcement System) units for the 485,000ft2 of 9-inch elevated floor slabs. The Suncoast SRS® assemblies provide an economical and easy-to-install solution for providing punching shear reinforcement in the thinner slabs that result from the use of post-tension reinforcement.

“The timeframe for the project was very stringent but being able to react so quickly and commit to the schedule is something our competitors couldn’t do,” says Suncoast Regional Sales Manager Raymond J Bontz. “There were two main core areas in the hotel itself where the post-tensioning tendons couldn’t be stressed, so our engineers had to provide a construction sequence that facilitated stressing the tendons from outside of these areas.

“We also had to provide very detailed drawings of our anchor system for the BIM [building information modelling]. You can’t have anything that would interfere with the glass facade of the hotel, so we had to create in-depth details of the anchorages which in BIM would show any potential conflicts with the facade embeds, so the anchorage locations could be adjusted if required.”

Keller completed much of the works ahead of time, exceeding client expectations.

“All the players involved in this project were totally satisfied with our work,” says Andres. “We showed that we had the ability to solve any kind of issue and make sure the project was delivered on time, schedule and budget.”