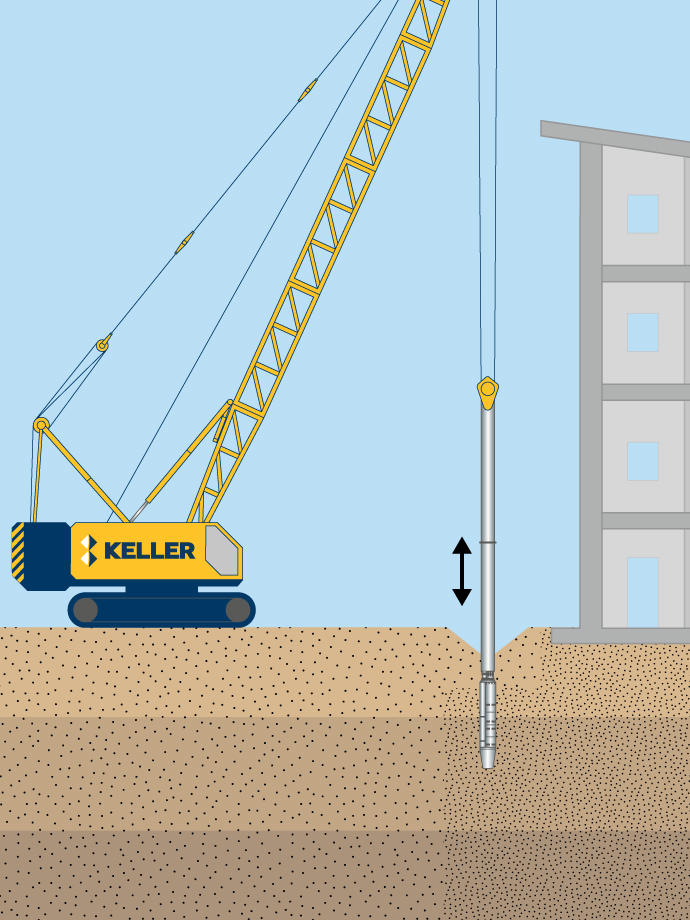 The improved soil characteristics depend on the soil type and gradation, spacing of the penetration points, and the time spent performing the compaction. Generally, the vibro compaction penetration spacing is between 6 feet and 14 feet, with centers arranged on a triangular or square pattern. Compaction takes place without stresses in the soil exceeding the overburden stress, which ensures permanent densification.

The use of clean sand backfill during vibro compaction allows the original site elevation to be maintained. However, on sites where the planned final grade is below the existing grade, no backfill is added, resulting in lowering of the site surface elevation during compaction.

Vibro compaction allows the use of economical spread footings with acceptable settlements and design bearing pressures generally in the range of 5 ksf up to 10 ksf. The process also reduces the seismic liquefaction potential. The required treatment depth is designed for each project and is typically in the range of 15 to 50 feet with a maximum depth of 120 feet.

Vibro compaction rigs can be fully instrumented with an onboard data acquisition system. Data from the system, such as amperage and lift rate, are recorded and displayed in real-time alongside specified target values on an in-cab monitor. Monitoring allows the operator to correct any deviations in real-time during the construction process to keep the vibro compaction within project specifications.

The vibro equipment we use is designed and manufactured by our in-house equipment manufacturer exclusively for use by Keller companies.

In-house quality production manager software enables us to capture and analyze data in real-time and valid the performance of the ground improvement being carried out. A variety of production parameters are generally logged during execution including depth, current, pull downforce, uplift/pull-down sequence, time and date, and element number. Field trials can also be used to verify column production parameters, along with static load tests, single or group, column material compressive strength tests, and column diameter verification.