Dry soil mixing is a ground improvement technique that improves soft, high moisture clays, peats, and other weak soils, by mechanically mixing them with a dry cementitious binder. 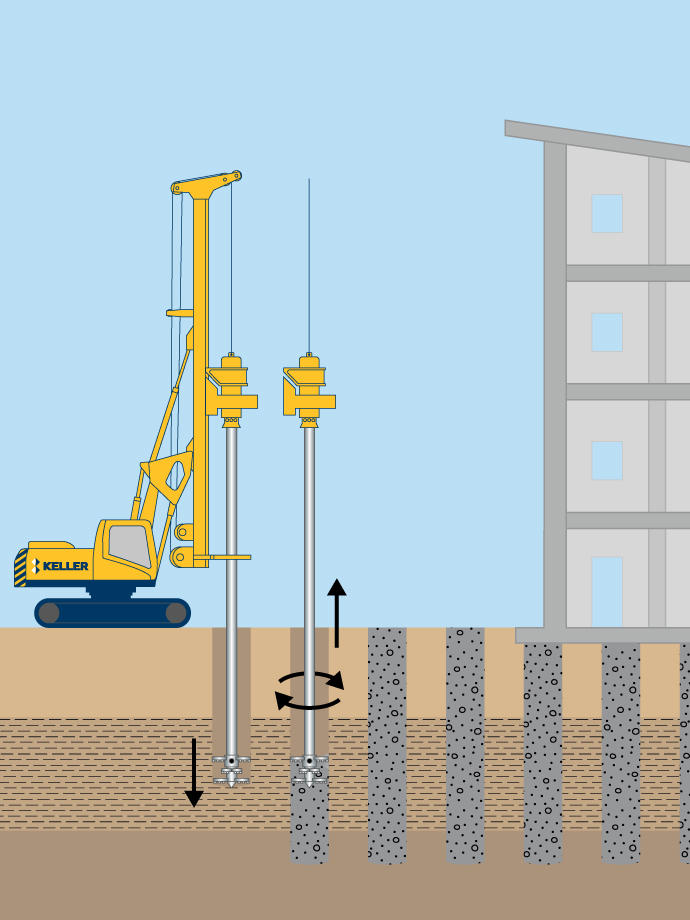 Dry soil mixing is a ground improvement technique that improves soft, high moisture clays, peats, and other weak soils, by mechanically mixing them with a dry cementitious binder to create soilcrete. To construct columns, a high-speed drill advances into the ground a drill rod with radial mixing paddles near the bottom of the drill string. During penetration, the tool shears the soils to prepare them for mixing. After the tool reaches the design depth, the binder is pumped pneumatically through the drill steel to the tool, where it is mixed with the soil as the tool is withdrawn.

The dry soil mixing process constructs individual soilcrete columns, rows of overlapping columns, or 100% mass stabilization, all with designed strength and stiffness. It is low vibration, quiet, clean, and uses readily available materials. This process is often used in high groundwater conditions and has the advantage of creating almost no spoil for disposal.

This method is best for soils with moisture contents greater than 60 percent and near the liquid limit. Soft cohesive soils, including organics, are usually targeted as other soil types can often be treated more economically with other techniques. Soils vary widely in their ability to be mixed, depending on the soil type, strength, water content, plasticity, stratigraphy, and texture. Organic soil and peats can often be stabilized, but laboratory testing is always recommended before design. Treatment is possible to depths up to 60 feet. Obstructions are sometimes pre-drilled ahead of column construction.

Also known as mass stabilization, is performed with a horizontal axis rotating mixing tool positioned on the end of a track hoe arm. The binder is pneumatically injected into the soil mixing tool through a feed pipe, which is attached to the track hoe arm.

Pre-production laboratory testing is used to determine the mix methodology, energy, and binder content. Mixing shaft speed, extraction rate, batching, and pumping operations are typically adjusted after constructing one or more test columns on site. Keller has developed proprietary equipment and software for the real-time control and monitoring of all mixing parameters during the soil mixing process. Coring of cured columns can be used to verify the strength. Visual inspection is possible with a camera lowered into a corehole. Test columns can be excavated for visual inspection of the soilcrete.