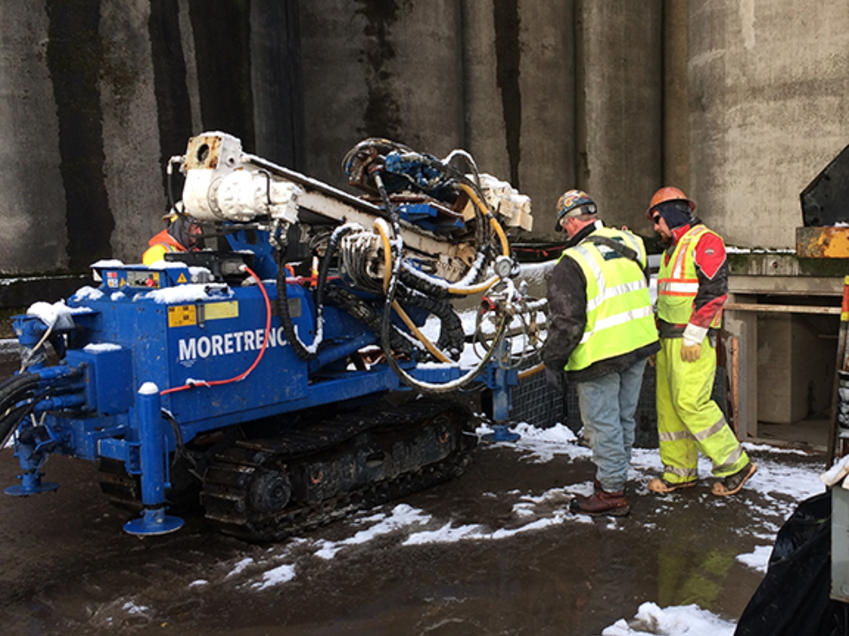 Founded 85 years ago, Great Western Malting is the oldest malting company in the western United States, providing quality malts to brewers, distillers and food processors across the Americas and Asia.

The main plant is located in the Port of Vancouver in Washington state, and it’s here that a bank of 26, 120ft-high silos which handle around 120,000 tons of grain a year were showing signs of movement.

“The complex was built on untreated timber piles that deteriorated over time, causing differential settlement,” explains Keller Division Manager John Stanbury. “This led to ongoing maintenance issues to maintain the mechanical systems, as well as visible cracking and displacement of the silos. The company had been looking at different ways to arrest this problem for a long time before we came on board.”

Keller was approached by Great Western Malting’s engineering consultant to provide technical expertise and explore ground improvement options to halt the settlement and replace the existing pile foundations to avoid having to demolish and replace the silos.

Over more than a year, Keller worked diligently with the engineer to explore options and develop a design, schedule and budget to meet the needs of the client, their engineers and other stakeholders.

“This effort included coordinating with the owner’s geotechnical and structural engineers to evaluate the design and impact to the structure, and with the plant production team to minimise impact to the existing facility,” says Keller Chief Grouting Engineer Lucian Spiteri. “After satisfying all parties involved, the owner awarded the project directly to us in a vote of confidence for bringing an innovative solution to their settlement problems.”

“We needed the safest, most efficient solution possible that would work within the constraints of the site,” adds John. "The answer was to use double-fluid jet grouting to construct more than 180 soilcrete columns, which would transfer the load from the existing pile cap through the soft soils below and into the underlying dense sands and gravels to limit further settlement. Many of these had to be constructed in difficult access areas with headroom as low as 9ft."

The right machine for the job

The team began the project with a Commachio 4D rig. It proved useful in some of the building’s hallways, but in corners and other difficult-to-reach areas, they switched to the more versatile Keller-made KB1. “If ever there was a machine meant for a job like this one, it’s the KB1,” says John. “The way it can articulate and fit into any space really made this project possible.”

Another challenge was removing the spoils. With all the work being performed from within the basement of the silos, spoils had to be carefully evacuated without creating a mess and damaging the existing structure and remaining mechanical equipment. The team used a vacuum truck and 6-inch diameter hose to reach across the silo complex, pulling the spoils some 350ft to external pits.

Throughout the six-month project, the Keller team liaised closely with the client to create a sequence that minimized impact to the site’s ongoing operations. This required working long days and weekends at times to complete areas and give the soilcrete enough time to gain sufficient strength before a grain delivery.

More than eight months after the project finished, monitoring shows the settlement has stopped.

“What made a real difference was in those early lengthy consultation stages, we took the time to guide everyone through the process and make sure they were comfortable,” says John.