Adopted in 2001, the Six Cities Trail Plan proposed the construction of several hike and bike trails to form an inter-jurisdictional ‘spine system’ of recreational trails between the Texas cities of Allen, Frisco, Garland, McKinney, Plano, and Richardson. The longest is the 24-mile Rowlett Greenbelt Trail corridor, connecting all six cities. 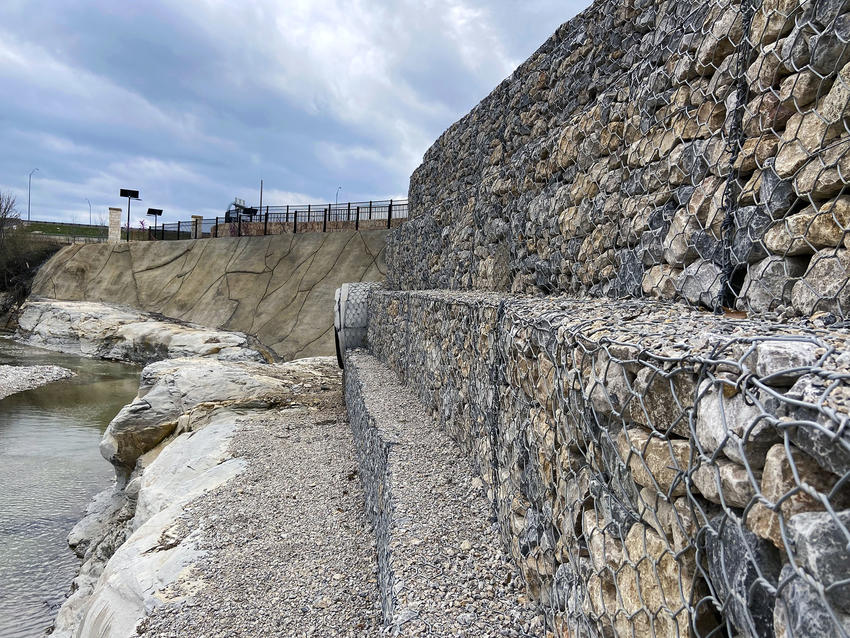 A 0.34-mile section of the Rowland Greenbelt Trail connects Frisco to the other five cities. Within this section, a 300-ft long portion of the trail runs parallel to and up to 20 ft above West Rowlett Creek. Creekbank stabilization was deemed necessary for erosion protection and trail support.

The owner’s original gabion wall design called for a large amount of excavation into a rock outcropping within the stabilization limits to facilitate the installation of the baskets. In addition, the original design required additional excavation due to an unforeseen condition where the limestone shelf dropped suddenly, leaving nothing as a base for the baskets.

Keller value-engineered an alternate design consisting of an anchored gabion wall and a soil nail wall where the gabions would not bear on natural limestone. This approach allowed the existing geology to be used without compromising the final product.

Tieback anchors were installed and bonded into the underlying limestone before installing and filling the gabion baskets. Each anchor was proof tested before being locked off. The gabion baskets were placed, and a reinforced concrete bond beam was cast into the back of the baskets around the anchors to transfer the load. Finally, limestone fill was hand-placed in the baskets to minimize voids between stones. The height of the wall varied, but at its tallest was 18 ft high.

The soil-nailed section comprised approximately 150 ft of the bank stabilization work. The nails were installed in a typical grid pattern. The holes were angled 10° from horizontal to allow the nail tendons to be grouted into place. Vertical drainage mats and steel reinforcement were then installed on the exposed face before applying an 8-in. thick shotcrete wall facing. Finally, the shotcrete received a sculpted finish to mimic the limestone in the creek bed.