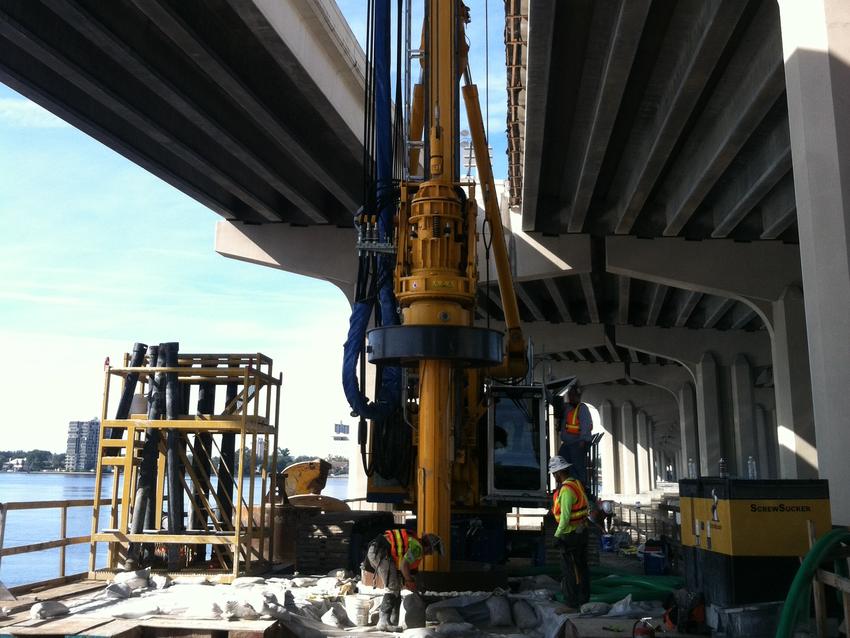 The Overland Bridge Project is the largest transportation design-build in the history of Jacksonville, FL. Extending south of the Fuller Warren Bridge that carries I-95 over the St John’s River, the project included replacement of a series of existing overpasses, widening of both the Fuller Warren Bridge and I-95, and replacement of an existing bridge spanning Florida East Coast (FEC) railroad tracks.

Work at both sites had to be accomplished in very restricted conditions while traffic flow along I-95 was required to be maintained at all times. At the Fuller Warren Bridge site, four shafts of the 16 shafts were to be installed in the St. John’s River from a trestle, raising environmental concerns. Here also, drilling between the existing bridge span and exit ramp meant tight clearances and complex rigging requirements.

The $277M project included the installation of drilled shaft foundations to support the new construction. Shaft diameters ranged from 42 to 72 in. with ultimate capacities ranging from 725 to 1,540 tons. Installation depths were between 55 and 95 ft below working grade. The overall project was phased over approximately 30 months in order to maintain adequate traffic flow along the I-95 corridor during demolition and re-building.

Prior to production work, three sacrificial shafts were constructed at +/- 700-ft intervals in similar soils along the corridor where production shafts were to be installed. Due to the large loads, Statnamic load testing was selected by the general contractor to verify design assumptions.

Construction at the Fuller Warren Bridge involves widening the south end of the bridge to provide an additional southbound lane adjacent to the two-lane exit ramp. With drilling to be accomplished between the main span and the exit ramp, sophisticated high definition light detection and ranging (LiDAR) laser scanning was performed to calculate drill rig and crane clearances from the existing bridge pier. From the results of the scan, these were pinpointed to be as little as six inches in places, requiring extensive rigging and lifting pre-planning. Twelve, 60-inch diameter land-based shafts and the four, 72-inch over-water shafts were drilled to depths varying between 55 and 80 feet and terminated in competent marl. All shafts were cased through the upper sands, with the stability of the underlying limestone and marl maintained with bentonite slurry. For the four over-water shafts, environmental considerations were addressed by fabricating and welding a containment device on the trestle beams to prevent discharge of any spoil or concrete into the river. Following the installation of the reinforcing cage, 4,000 psi concrete was tremie-placed through the bentonite slurry.

At the FEC railroad bridge site, two bridge spans remained open. With work accomplished within an urban environment and adjacent to active roadways, railroad tracks, and an existing MSE wall, a heightened level of safety was maintained at all times. Thirty-one, 60-inch diameter and eleven, 42-inch diameter shafts were installed to depths of between 55 and 70 feet using the same construction method as the Fuller Warren Bridge shafts.