Great Western Malting, located in the Port of Vancouver, WA along the Columbia River, is the oldest malting company in the western US, providing high-quality malts and specialty grains to brewers, distillers, and food processors across the Americas and Asia. 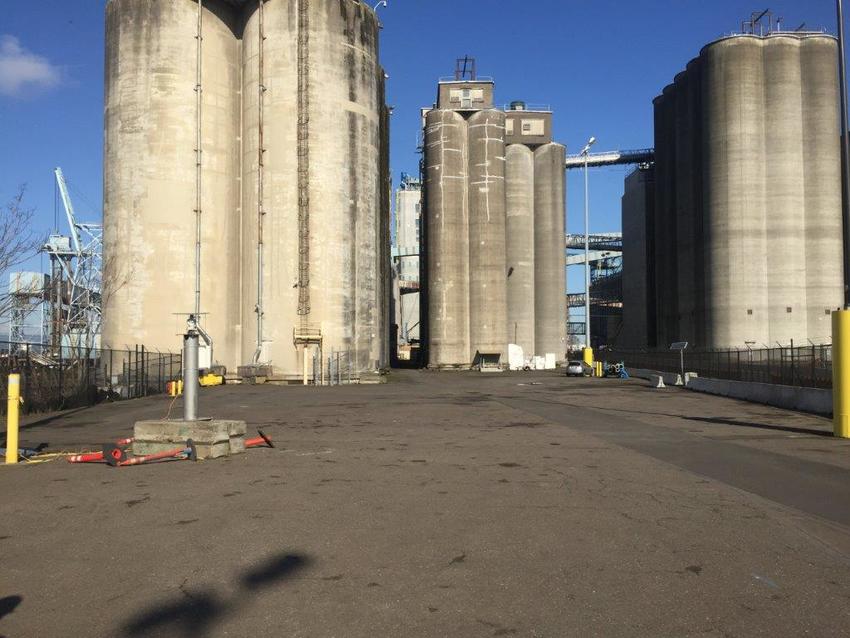 A battery of 26, 120-ft high, cast-in-place concrete storage silos were installed in one area of the facility between the early to mid-1940s. The silos are situated atop a shared concrete pile cap which is supported by untreated timber piles. The pile cap serves as the floor of the basement area beneath the silos. This basement houses the mechanical system that operates the conveyer belt system for the collection of various ingredients for conveyance to clients. In recent years, the silos experienced differential settlement attributed to the gradual deterioration of the exposed portions of the piles due to seasonal fluctuation of the natural groundwater over time which is directly controlled by the Columbia River at this location. The differential settlement had resulted in visible cracking and displacement of the silos. This led to ongoing mechanical system maintenance, forcing the owner to look for a permanent solution to halt settlement and avoid having to demolish the silos.

Soils beneath the pile cap consist of a loose to medium dense sand fill overlying a soft to medium stiff silty clay underlain by medium dense coarse sand which was assumed to be the bearing layer for the timber piles. The primary challenge to the owner was to arrive at a permanent solution that would halt further settlement in a cost-effective and timely manner while creating minimal disturbance to ongoing facility operations.

Keller was initially approached by Great Western Malting’s engineering consultant who was aware of the company’s technical expertise in a wide range of ground improvement and foundation services. The first step in the process was to utilize Geo Instruments to install a continuous monitoring system to gain accurate baseline data on the structure’s movement and provide assurance to the owner that the silos were stable and safe for continuous operation. Following a coordinated effort between all parties to evaluate options, a solution was agreed on that would utilize double fluid jet grout to construct soilcrete columns to transfer the loads through the underlying soft soils and into the bearing sands below. Jet grouting operations would be implemented from within the low-headroom confines of the basement area, and the work would be phased in a manner that the owner could maintain operations.

A 4-column test program was conducted outside of the structure immediately adjacent to the silos to verify jet grouting design parameters. Access to the basement area was provided via a slope cut from the original grade and two openings created in the basement wall. The Owner’s contractor facilitated access by moving the conveyor system and providing the containment to allow the jetting to be performed while maintaining plant operations. The owner also facilitated the underpinning by temporarily unloading the silos to reduce loading conditions during underpinning. Ultimately, the work was completed in sections to further minimize disruption to active facility operations while providing access to perform the work efficiently.

Keller utilized low-headroom, highly maneuverable geotechnical drills in the basement spaces where vertical confines were as little as 5.75 ft in places. The ultimate solution included installing a group of seven, 4-ft diameter jet grout columns in a ring beneath each silo where the vertical load was concentrated, extending from the underside of the slab to a competent bearing stratum. In order to create effective load transfer from the relatively thin pile cap, the top 5 ft of each column was expanded to a diameter of 6-ft to create an enlarged corbel, minimizing the bearing pressure of the slab on the jet grout column. During the work, an automated station provided continuous monitoring for out-of-tolerance movement. A total of 168 columns were installed for the project to underpin a total of 24 silos within the complex. 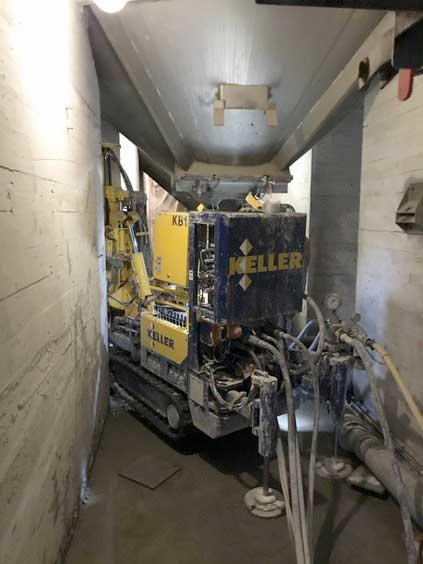 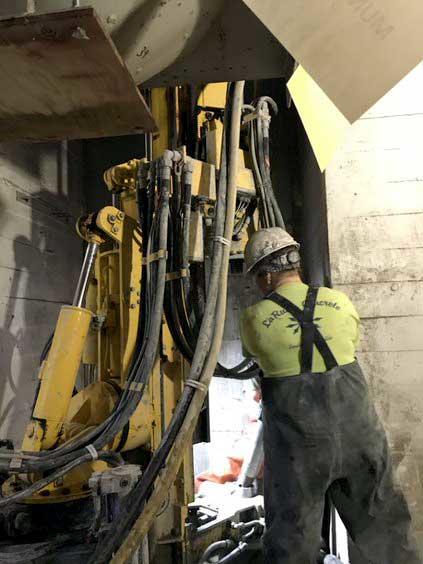