Keller reduced the total foundation cost using a combination of wick drains and surcharging to eliminate down-drag on the pile foundation system and reduced the time required to achieve full consolidation from 50 years to less than 1 year. 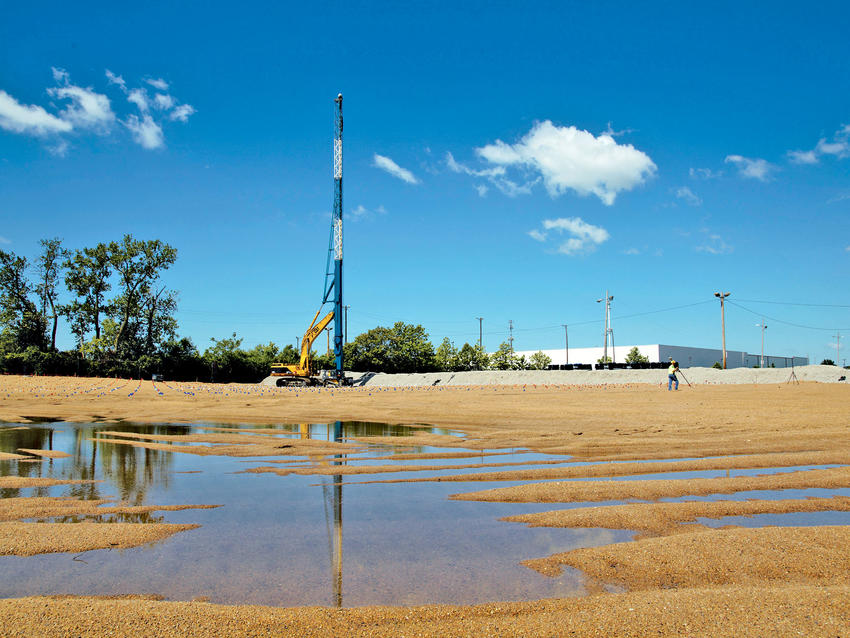 Wick drains being installed to allow for a rapid surcharge and consolidation program.

A planned eight-million-gallon storage tank was designed to store excessive runoff water during a storm event until it could be released to the sanitary system for treatment. Six to eight feet of fill would first be placed to raise the site grade. The site subsurface profile consisted of 6 to 12 feet of urban fill comprised of gray clay with miscellaneous debris, underlain by approximately 80 feet of very soft to soft clay.

Consolidation of the soft clays below the tanks would have resulted in significant down-drag loading on the planned pile foundation system. Additionally, large differential settlement values were anticipated between the pile-supported tanks, and the adjacent utilities and roadways to be constructed on untreated soil.

Keller installed over 600,000 linear feet of wick drains, with depths reaching over 100 feet to allow for a rapid surcharge and consolidation program that eliminated the down-drag loading on the pile system. Wick drains and surcharge of the adjacent utility and roadway zones reduced the risk of damaging differential settlement between the tanks and utilities.