A new football complex was slated for construction on the UConn Storrs campus. Ground improvement was chosen to meet the off-season construction schedule. 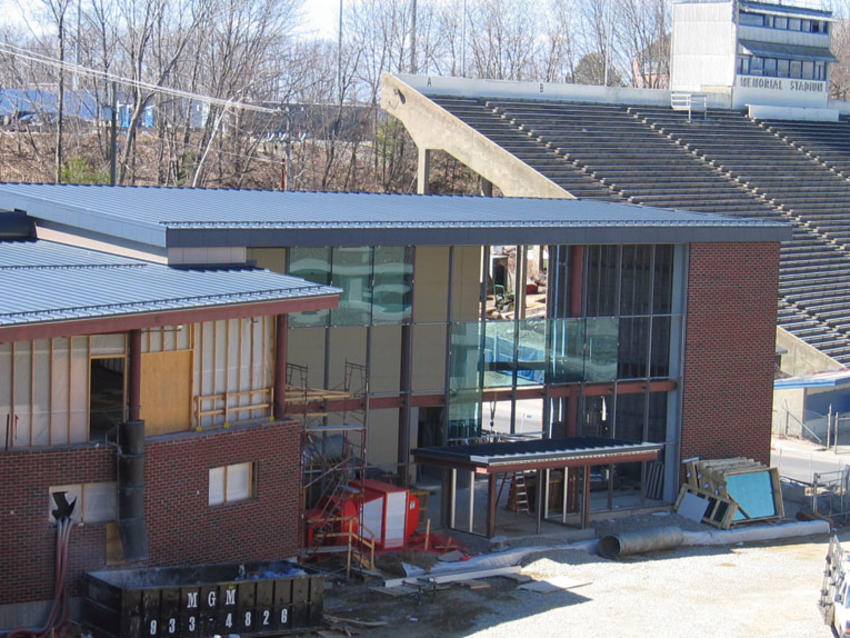 The Burton Family Football Complex, consisting of a building for offices, training facilities, academic resources, and an indoor playing field, was slated for construction on a filled wetland on the University of Connecticut Storrs Campus.

Portions of the site were underlain by thick deposits of organic soil, while other portions were underlain by a thinner layer of organics and a thick layer of loose granular fill. Neither the fill nor the peat would adequately support the planned building and indoor playing field. In the eastern area of the site, where the peat layer thickness was excessive, both the overlying fill layer and the peat layer were excavated by the General Contractor. To avoid the cost of a de-watering program and temporary bracing, the Site Contractor performed the excavation and fill placement underwater. Underwater placement resulted in very loose soil conditions.

To support the load transfer platform and playing field loads, Keller constructed 30-inch diameter vibro piers on an 8-foot triangular grid and 36-inch diameter piers beneath the grade beams. Where the excessive organic soils were removed, Keller performed vibro compaction to a depth of 15 feet, at 452 points, to compact the loose granular back fill.

Modulus Testing performed on a sacrificial vibro pier demonstrated that the design performance was achieved. In the over excavated area, SPT tests were performed between vbro compaction points, verifying that the required compaction was achieved in the loosely placed granular fill.